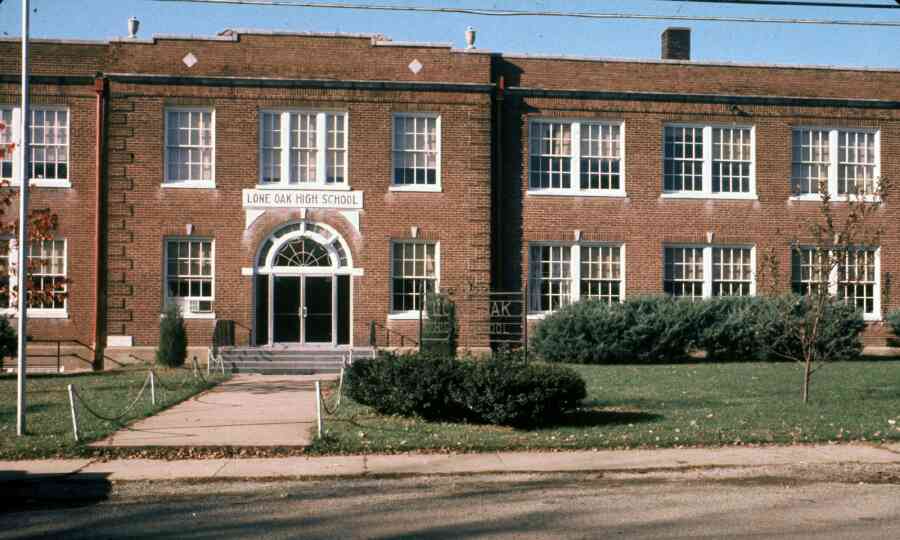 Taking a page out of history... no, really, someday this page will be part of the History section. But in the meantime, we will include it in the Class of 72, with a cross link in the Class of 73.

The pictures and memories presented below are compliments of David C LeDoux '72. David found these slide images in old archives, and was kind enough to scan and share for all to see. Taken during visits home from college after graduation, David chronicled the demolition and reconstruction process from May of 72 through August of 73. In his own words:

I took these photos between May 26, 1972 and August 26, 1973. They capture the demolition and some of the rebuilding of Lone Oak High School, necessitated by the fire in February of 1972. Notes are included on the photos, hopefully accurate after 47 years. Note that the photos are in 14 different groups. The photos in each group were taken on the same date, which is included in the image filename.

The fire heavily damaged the central section (including the main entrance) of the original building, built in 1927. This damaged section was demolished, along with the entire north end (the original auditorium which had been subsequently divided into classrooms), and a new expanded north end was constructed. The central section of the building was also expanded toward the gym to fill the space between the two gym walkways (see below). In the photo notes, I refer to the original building as the "old building" or simply "the building".

Before the fire, there were two covered walkways between the old building and the gym. The southern-most walkway ran across the front of the gym; I call this the "front gym walkway". The other walkway connected the center of the old building to another gym entrance near the north end of the gym. This walkway was the one most often used by the students to attend pep rallies and assembly programs; I call it the "north gym walkway". This walkway was fully enclosed as part of the new construction that occurred in the area between the two walkways.

Also in the picture notes, I refer to the building with vertical white stripes as the "band building" since it housed the band room and other classrooms. Neither the gym nor the band building was damaged by the fire.

Thank you David for your contribution. David's pictures are divided below by the date taken. Captions are included, but may be shortened due to available formatting space. David's complete descriptions are included in the slide show available by clicking on any image. Please note that although divided by date here, the slide show runs contiguous from May 72 to Aug 73.