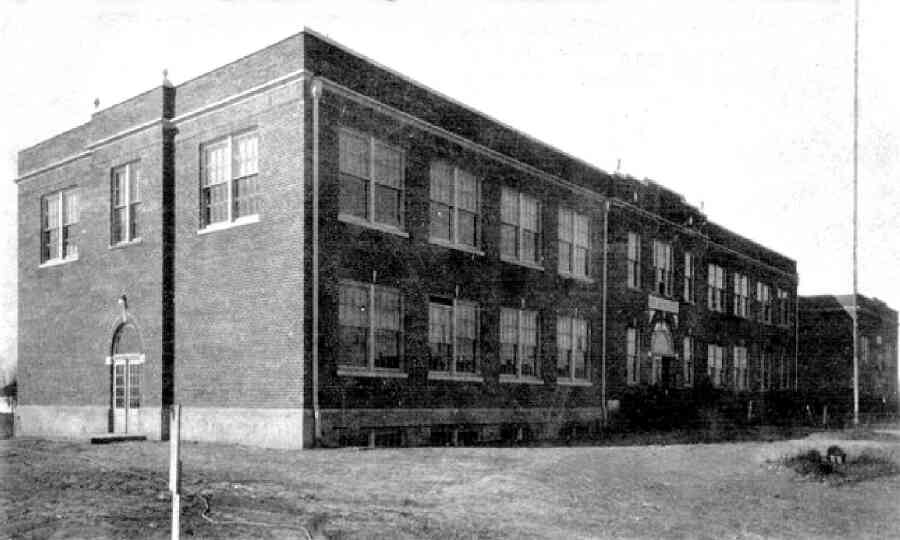 While digging through the "Oak-K" file cabinet at LOHS for the Archive Project, students have found two copies of the Enterprise - LOHS's first newspaper. Both were worn, tattered, taped, very fragile, and suffering from an archivers worst nightmare; cellophane tape - but mostly still readable. In addition to photographs, we were able to perform a 360 degree scan with a flat bed to enable some degree of cleanup and restoration. The menu buttons download the remastered editions in PDF format. We hope you enjoy the trip into history.

Twelve years after the official opening of Lone Oak High School, only a few of the 37 graduates in the Class of 32 can claim Lone Oak as their home school. Most of the seniors came from the more than 40 one and two room common schools scattered around the county as well as a few from out of county or state. Interestingly, one is just ceremonially graduating as he had completed the required classes and credits much earlier. One senior is twenty-five years old with a family, now completing his high school education. A far different picture than the homogenious class of 18 year olds we see today, but very successful at building a consistent quality educational system.

From the Enterprises we also learn the following:
These issues of the Enterprise has volume numbers, 1932 is volume 6, the publication started in 1926. The April issue is number 6, last one of the school year, thus it is published six time a school year.
For 1932, the Enterprise newspaper won two state wide awards from the Kentucky High School Press Association.
A reference is made to the senior class starting in the "new" high school in 1928. Records show the "college" building, refering to the Kentucky Western College building located at present day Hwy-45 and Friendship Road, burned in late 1926. So we now know the Lone Oak High School on College (John Robinson) Avenue opened in 1928, two years later.
We also see in the editorial that funding for the county school system was a problem. As it was in the beginning, in 1932 and as it is today; few things have changed in the 80 years since.
From the overall tone of the newspaper, we also see that life at the high school was serious, but fun, with time for outtings, trips and school wide events. Under the leadership of Principal Woodfin Hutson, we are seeing the school more as a family than an institution and that is confirmed as we talked to the old timers of that era.

We have two Class pictures from 1932. The one on the right above is cut from the front page of the April Enterprize newspaper and the listing below is transcribed, to the best of our ability, from the caption below the image.

The picture on the left is the same picture, scanned from an issue of the Lone Oak News. The Lone Oak News image was most likely taken from an original photo, although somewhat distorted by the usual problems of scanning newsprint, and is obviously clearer and cleaner than the Enterprize picture. Thanks to the contributor, the Lone Oak News issue also has the class listing clearly included.

Upon close examination, you should easily see that the pictures are not the same and the class listing is different. Actually they are the same picture, except that they are mirrored from each other and so is the class listing. After some friendly discussion, we are going to make an educated guess that the Lone Oak News photo is correct and for some reason the Enterprize photo is reversed. Why? The mortarboard tassles are all on the right side as they should be before graduation-when the picture was most likely taken. The interesting point is that both caption listings are correct for their picture. Reversing of an image is easy, even in the old days of manual developing. Today, it is the click of a mouse, but we left these two images as is to maintain the mystique of Lone Oak High School.

If you have addition information that is applicable to the Class of 32, please e-mail the site Webmaster. Please provide contact information so that we may reply.