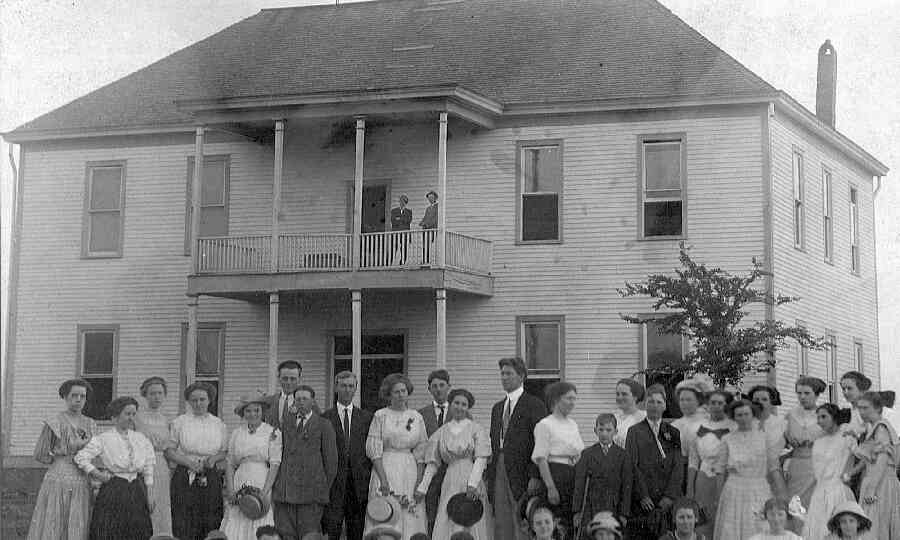 This page is dedicated to and provides all the information we have about the Lone Oak High School Class of 1924. The Class of 1924 consisted of 13 graduates and as we learn from the Class History, was a collection of students from several other schools in the county only four of which completed all four years at Lone Oak High. In 1924, LOHS was still meeting in the Kentucky Western College building. J. D. Dixon was Principal at the time.From the year, we have a few graduation programs and a couple of pictures from Buddy Rushing's collection. The most interesting item is the Class History, written by the class members. The history provides a good picture of not only education from the era but also of the widely spread educational system. The original history was typed, with a lot of corrections. Probably not published, most likely spoken at an event. Because it is difficult to read as an image, the content is reproduced below the pictures.

The images above are of the 1924 Commencement Program, which provides us not only with the class memebers, but also school dignitaries. 1924 Class History is also shown above and reproduce below.

The Class of 24 boys are shown above along with Paul Farthing's senior report card. We hope Paul won't mind us showing this. It is a good report, but even more interesting are the classes and subjects. We are not sure why this lists Paul's age as 20. According to census records, Paul was born in 1906, which would make him 18 or 19 at the time.

Below is the history of the Class of 1924 as written by the class at graduation. We have no real indication of who actually composed the piece, we can only guess that it may have been Paul Farthing. Paul was one of only four who attended LOHS for all four years. Paul was also left out of the last paragraph, which probably gave us a good list of who didn't write it. Out of a class of 13 graduates, a lot of students joined and left the class from several area schools over the course of their four high school years. By any author, it is enjoyable reading and we are grateful to have it. The text below is the content correct version for better readability. Many thanks to Buddy Rushing for collecting and maintaining these bits of history.

HISTORY OF THE SENIOR CLASS OF 24

We will divide the history of the senior class into four distinct periods. First the Prehistoric, or what little is known of the class before it's organization. Second, Ancient History, or history of the freshman year. Third Medieval, or Sophomore Junior history. And last but not least, Modern, or history of the past year.
Now, as a historian would say, let us look at the prehistoric time. Nothing is known or dreamed of the senior class of 24, from Lone Oak. Its members are scattered over the city, this and Graves County, and one of them attending school in Missouri.
We will consider the history of this class to begin the first day of school in 1920. This class has been cross graded and some members in school longer than others that it is hard to get an accurate and authentic record. But the author after unearthing several old manuscripts and parchments, pens these lines.
When the Freshman class was called at the beginning of the 1920 term, the following members reported; Trevia Lovelace, Thelma Ingram, Lucile Green, Katy Housman, Brandon Shelton, Homer Jones, Kelly Crayne, Truman Ross and Paul Farthing. For the first time this class tackled Algebra and Biology. In the course of a month, three members were added to the class roll. Horace Ross, Nell and Silva Woods, and last but not least, Paul Perdew, who has gone down on the pages of school history as the wisest fool the school has ever known. Mr. Perdew was exceedingly fond of Algebra. In the old parchment I find this statement, which is characteristic of Paul; Paul Perdew, freshman, Algebra, X times X = 2X and X plus X = Xsquare.
All went well for half the school, then one day, from the clear sky the greatest disaster the world has ever known fell upon the class, namely Latin. The cannons begin to boom, and the class has constantly been at war since that time. But some author has said, "The Pen is mightier than the sword," so this class won all the battles.
Bessie Ward, Dessie Ward, Hazel Sperry, and Hillard Otey spent their freshman year at Lowes, and access to an official record was not gained. Clara Adcock, spent her freshman year at St. Mary's Academy, and little is known of her record there. Lee McKenny, Herman Thompson, and Lucille Futrell, spend their freshman year at Lone Oak, but with another class.
Next we come the Medieval, or Sophomore Junior history. The same class reported for work at the beginning of school with the exception of Trevia Lovelace and Thelma Ingram. The class was glad to welcome and receive as members, Hillard Otey, Bessie and Dessie Ward, and Hazel and Elna Sperry from Lowes. Also Miss Clara Adcock from St. Mary's Academy. And we're sorry to lose Truman Ross, who quit school a little later.
At the beginning of the Junior year we lost members and gained one, Kelly Crayne, did not report for work, but his place was taken by Miss Roberta Jones another student from Lowes. But we are sorry to state, Homer Jones, Brandon Shelton, Roberta Jones, and Elna Sperry left the class before the close of the year. The beginning of this year marks another great episode of history, the class conquered Geometry.
Now let us come to the Modern, period or history of the past year. The following members reported for Senior work, E.D. Overstreet, Lee McKenny, Hillard Otey, Herman Thompson, Paul Farthing, Clara Adcock, Lucile Green, Lucille Futrell, Katye Housman, Hazel Sperry, and Betty Ross. Nothing is known of Betty's early life, but her presence has been strongly felt by the class. E.D. Overstreet, joined the class and little is known of his life except that he attended school at Lone Oak, Paducah, and Bowling Green. Bessie and Dessie Ward started to school at Lowes this year, but the magnetic attraction of the old Lone Oak could not be resisted, and they came back a few weeks after school started.
Nell and Silva Woods, by attending a summer school, graduated a year ahead of the class.
The following class officers were elected;

This class has been known all along as an irresistible force, and several times when supposed immovable objects were thrown in the path of this class they went down in defeat like Napoleon at Waterloo.
Each member of this class has several volumes of personal history, some of it too personal to mention. I will tell some of their characteristics.
Our honorable president E.D. Overstreet, is noted for his marksmanship, no head has been discovered that at a distance of twenty five yards he cannot hit with an eraser or piece of chalk. Clara Adcock, our secretary, is noted for her temper and kind words when she is angry. Hillard Otey is so thick headed, in Mathematics, that some facts he learned in the freshman year are just penetrating the brain. Lee McKenny, is so bright his mother calls him son. Herman Thompson is so well cultured in High School subjects that he has not seen fit to look at a book in the last years, except when it was time to recite. Bessie and Dessie Ward, has puzzled both class and faculty for a long time, no one can tell which is which, and if they don't care to tell the truth we don't know then.

If you have addition information that is applicable to the Class of 24, please e-mail the site Webmaster or post on the LOHS Alumni Facebook page.